Thank you for your patience while we retrieve your images.

Created 11-Nov-15
18 photos
For over 100 years, St. Mary's College was a religious preparatory school for young men entering the seminary. The school was founded in 1866 and its main building was erected in 1868 in Ilchester, Maryland, just outside Ellicott City and not too far west of Baltimore on the B&O rail line. The school was run by a Catholic religious order known as the Redemptorists. Over the years, the number of men entering the order dwindled and the school was eventually forced to close its doors in 1972.


As the building began to fall into disrepair, it became a target for vandals and thrill-seekers who nicknamed it "Hell House". These trespassers may or may not have been responsible for the major fire in 1997 that left the building the crumbling mess that it is today. Despite its current state, the air of mystery around the building has only grown and rumors still circulate -- there was a psychotic caretaker who would release his man-eating dogs on trespassers, satanic cults were performing strange rituals on the grounds, people had been murdered, there were ghosts of former students haunting the building, etc. Most of these rumors are false, although there was at some point a somewhat unstable caretaker patrolling the grounds who got a little too carried away one night and shot a trespasser. 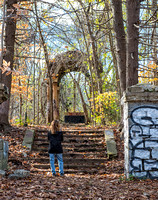