Thank you for your patience while we retrieve your images.

Created 13-May-17
98 photos
Located in Westborough Mass and scheduled for demolition in the next few months.
Westborough State Hospital or "Westborough Insane Hospital" is a historic hospital along Lyman Street, north of Chauncy Lake and junction of Milk Street and MA Route 9 Westborough, Massachusetts, which sat on more than 600 acres (240 ha).
The hospital was established in 1884 on the grounds of the State Reform School for Boys. The existing buildings were renovated to accommodate the needs of a mental hospital and was opened on December 1, 1886. This was the first homeopathic hospital for the insane established in New England; but such hospital existed in New York, Michigan and perhaps other states.[2] The Hospital was added to the National Register of Historic Places in 1994.
The hospital was closed in 2010, led by Chief Operating Officer, Joel Skolnick, in anticipation of a new Worcester State Hospital opening in 2012. The 10 bed Deaf Unit, The 2 Adolescent Units and the Intensive Residential Treatment Program (one step below State Hospital Level) programs were closed by June 2010.[3]
The pioneering African-American psychiatrist Solomon Carter Fuller spent the majority of his career practicing at the hospital. While there, he performed his ground-breaking research on the physical changes to the brains of Alzheimer's patients.
On May 9, 2015, a memorial service was held in nearby Pine Grove Cemetery for the more than 500 patients who died at Westborough State Hospital and whose remains were unclaimed and subsequently buried in a potter's field. The service was part of a larger effort to put names to the graves of the deceased.[4] Wikipedia 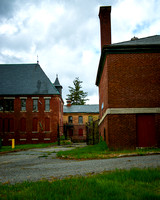 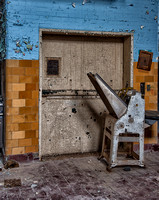